The Basingstoke Shed were given an old short scale bass guitar of Far Eastern manufacture to “do up”.

The guitar had been kept in a damp garage and was in a sorry state. It was filthy and corroded and its neck was like a banana. The truss rod was completely ineffective in straightening the neck. 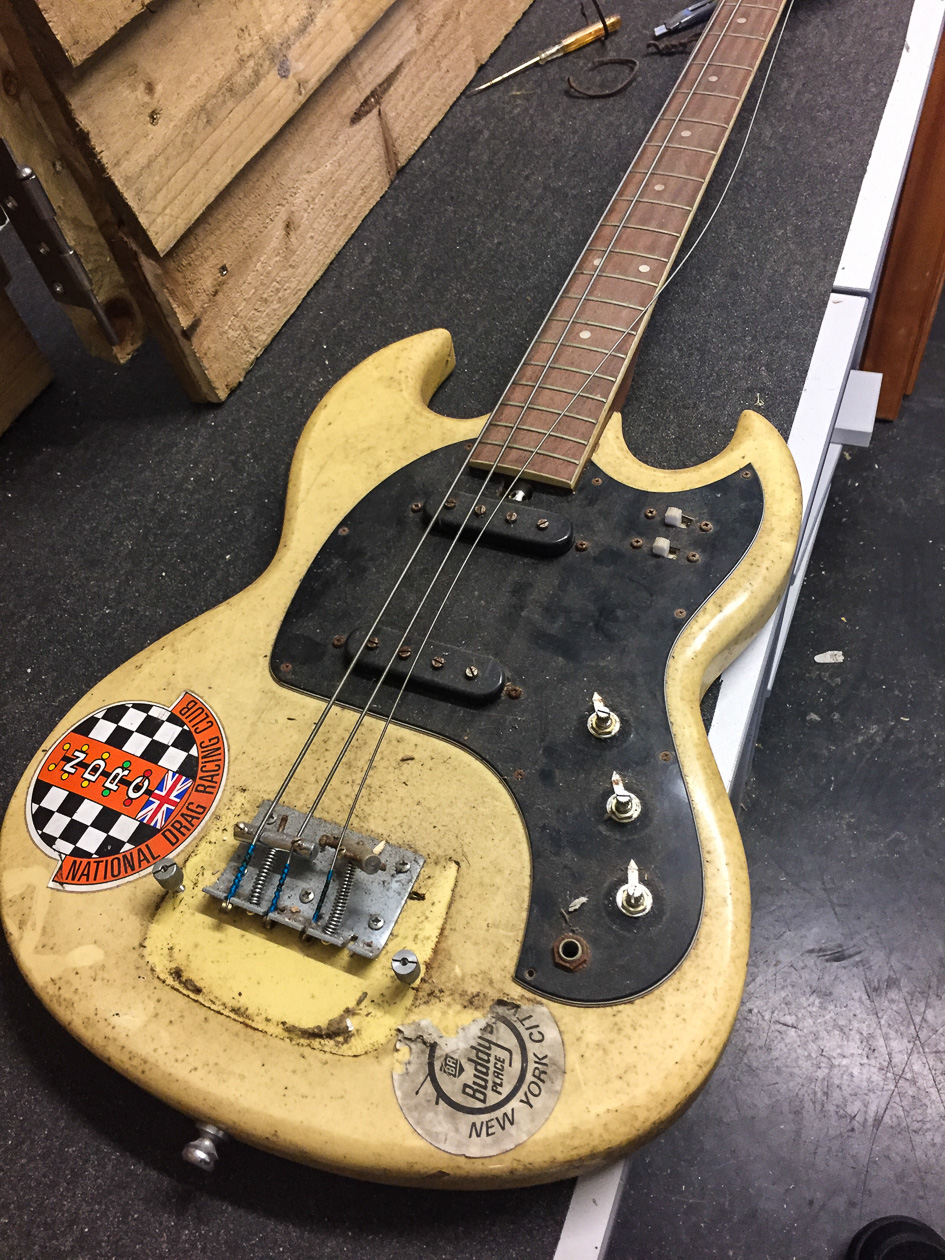 The guitar had been owned by Rick, a relative of a Shed member, who died some time ago. There was an “R” attached to the head. 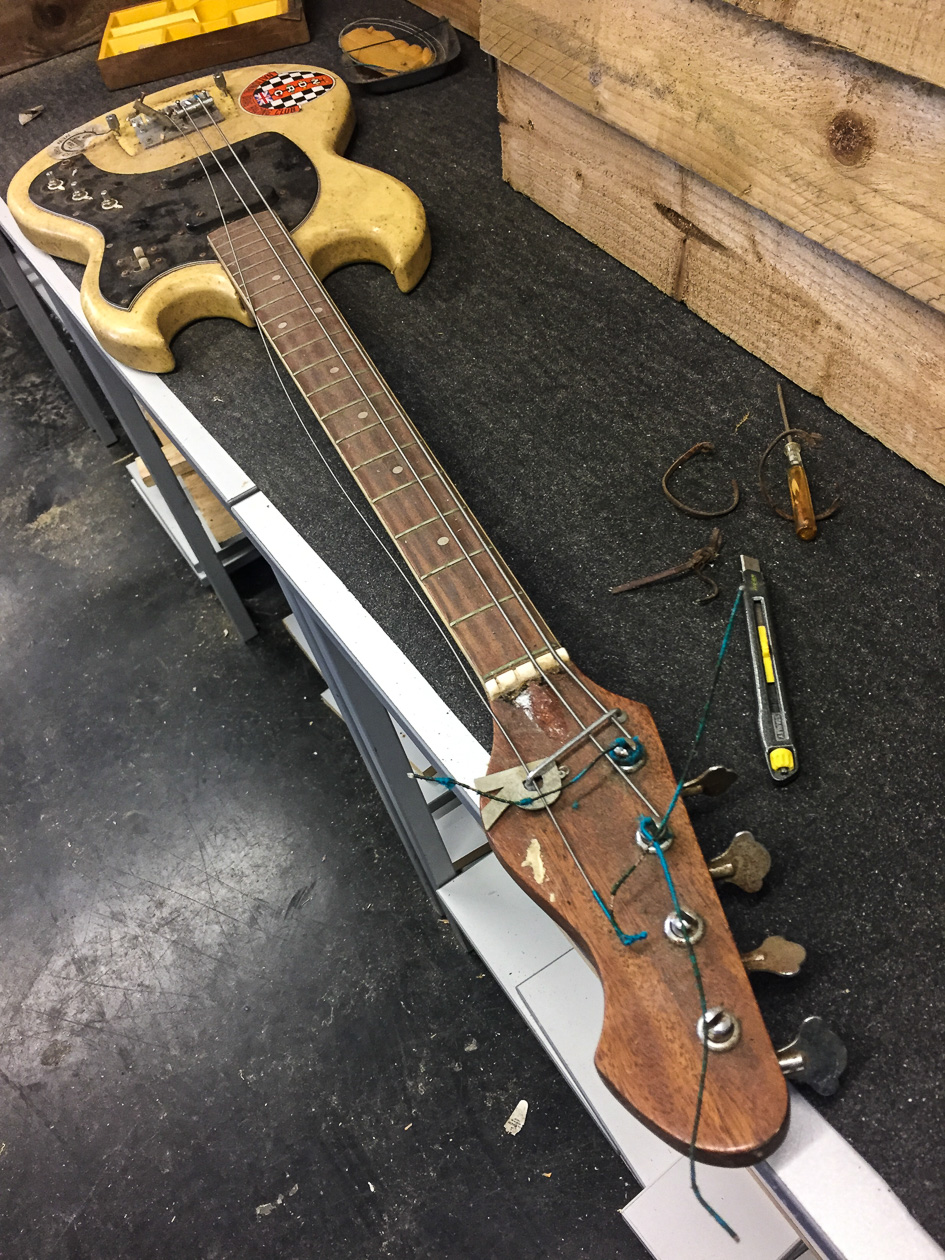 During the dissembling of the guitar several of the cheap soft screws holding the bridge on refused to budge and their heads became damaged. We had to drill them out and fill the damage with tapered inserts.

All the metal parts were given a long vinegar bath to remove most of the corrosion, washed, carefully dried and protected. Replacement dome-headed screws were sourced as necessary.

To tackle the ineffective truss rod the fret board had to be removed. The glue responded well to heat from a household iron and a scraper was eased along to exposure the truss rod channel. 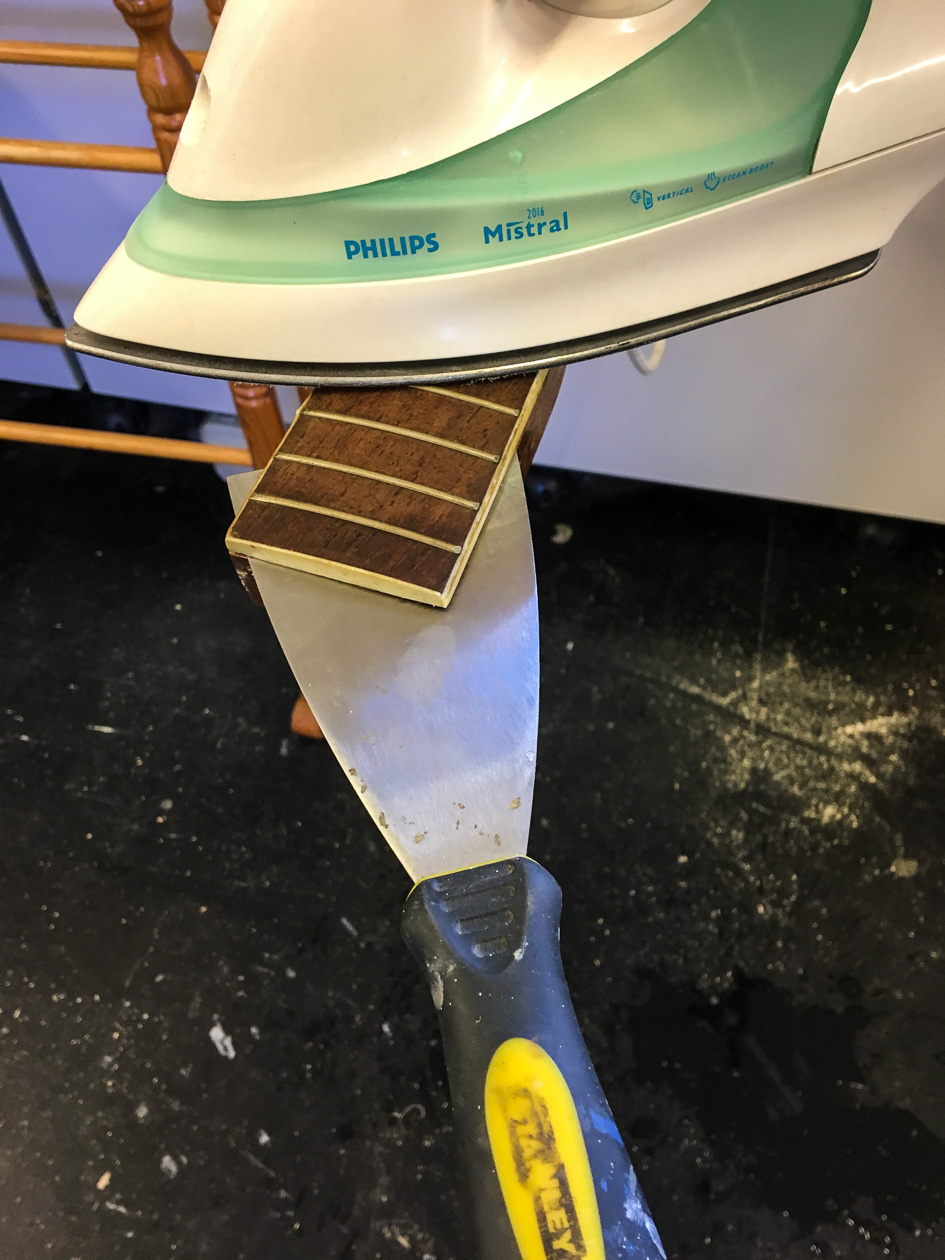 The truss rod corrosion is evident. 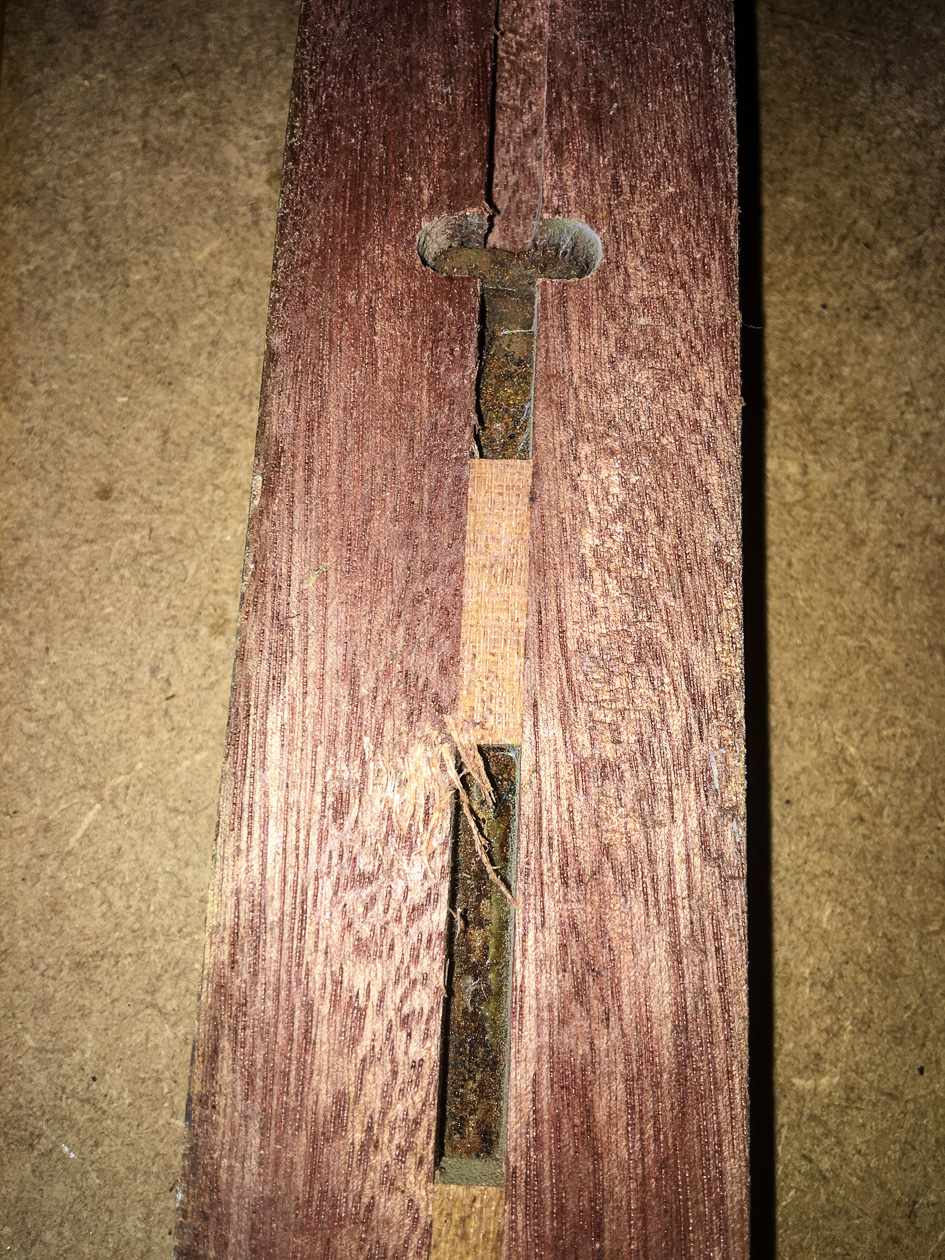 The fillets holding the rod down were popped out and the truss rod removed, cleaned and replaced.

A new mahogany fillet was fashioned, glued in and, along with the neck, planed flat.

The fingerboard was cleaned and glued back onto the neck.

The guitar body was scraped, sanded with 80 grit paper and cracks and blemishes filled.

The whole thing was then carefully and painstakingly re-sanded with 80 grit and then with 150, 220 and 320 grit papers. A tack cloth was used to remove all the dust. 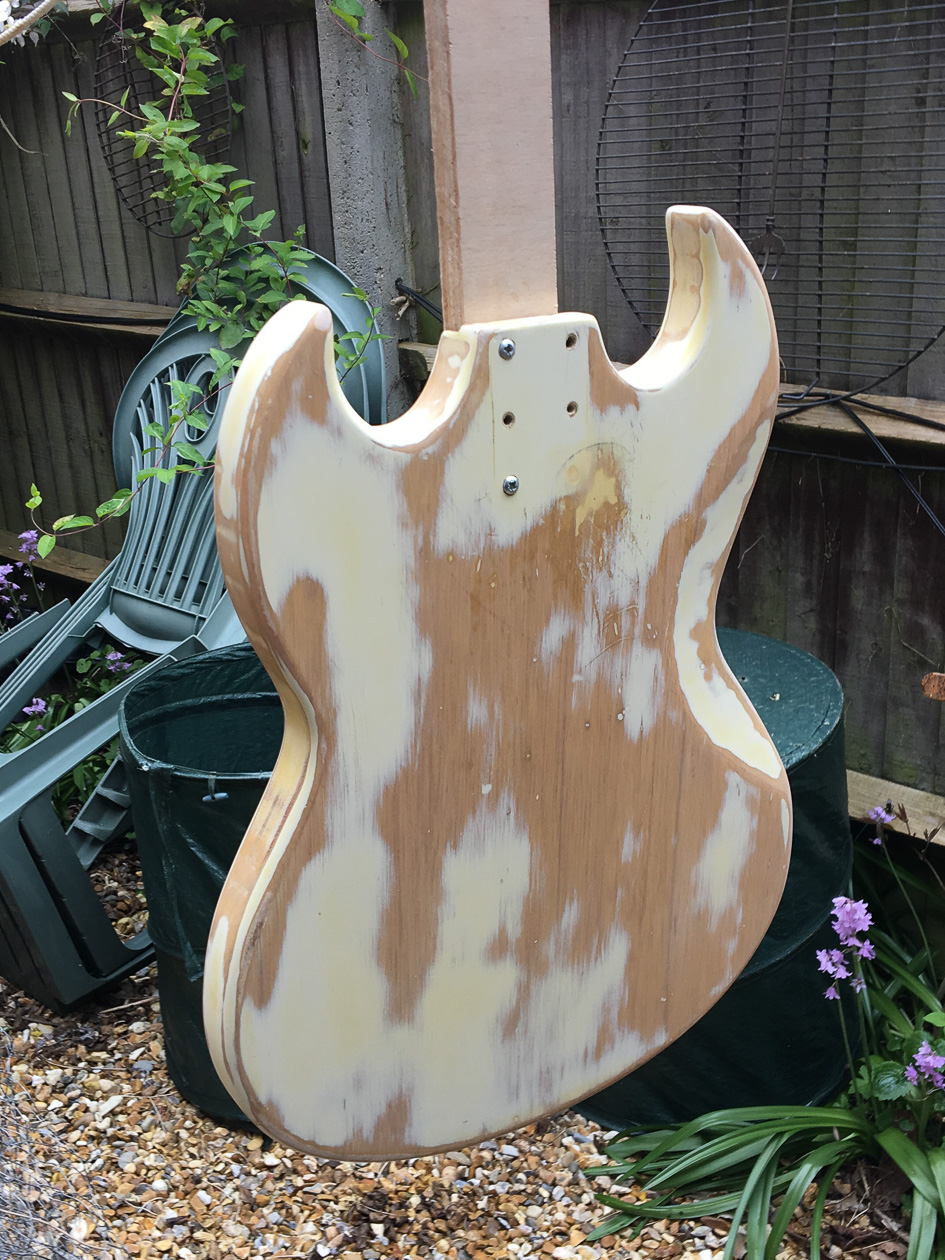 Three or four coats of primer were carefully sprayed leaving the requisite time between applications.

After leaving for about an hour the primer was sanded with 400 grit until silky smooth. Then careful checking for, and fixing, any imperfections.

Three or four colour coats were applied and then another hour’s wait. 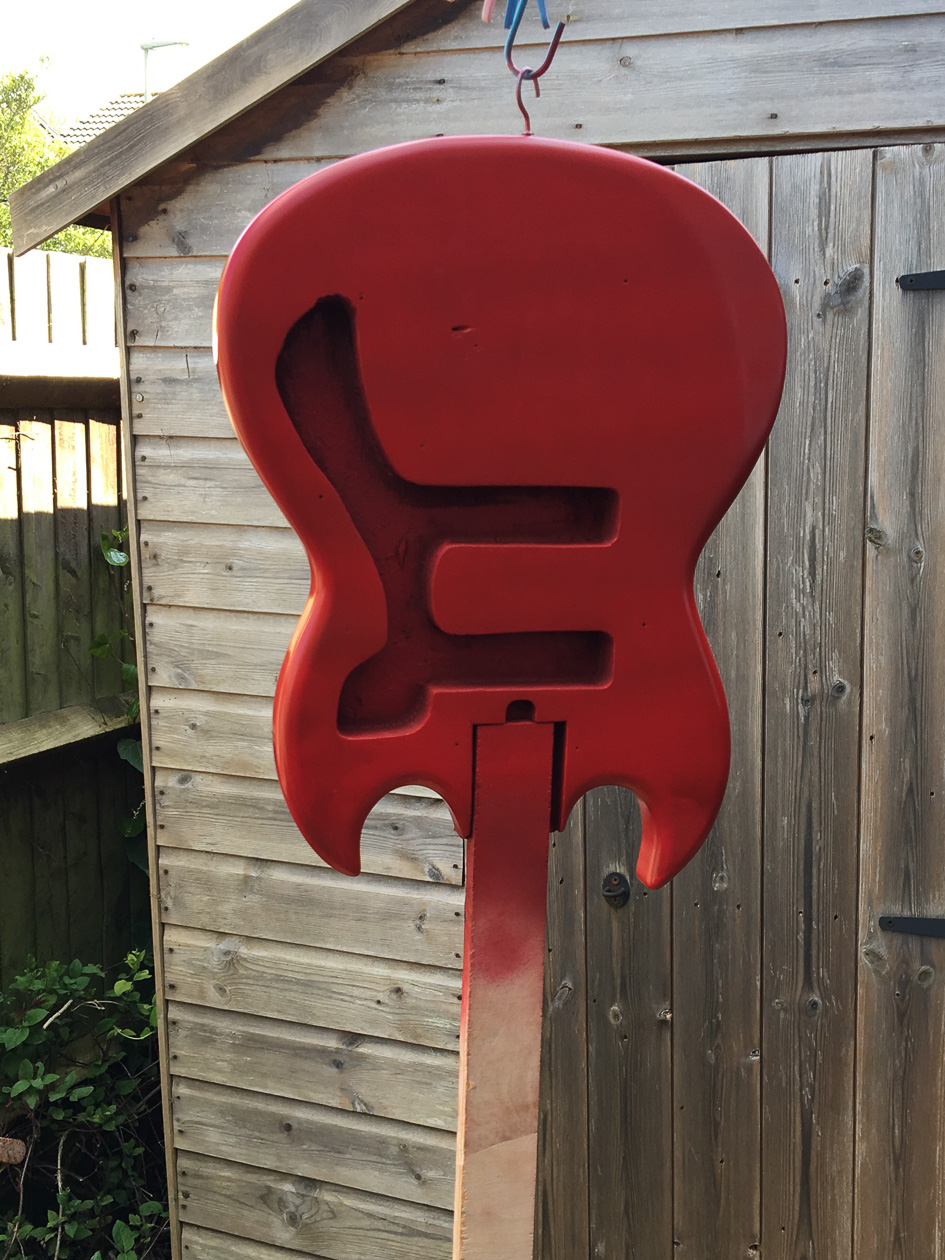 Then a light mist of clear coat followed 6 more coats. 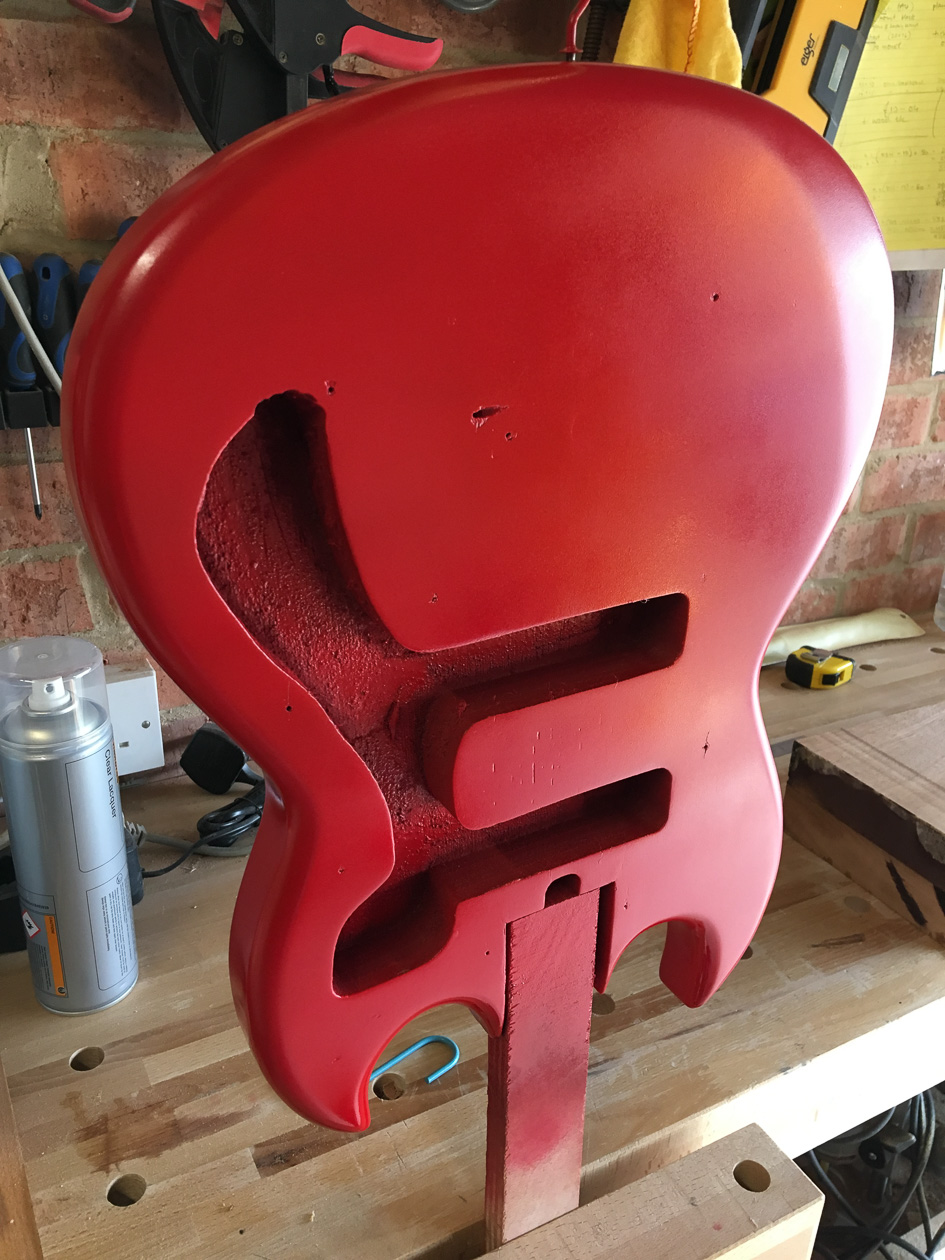 The clear coats were left for a couple of weeks to cure.

The orange-peel finish was then carefully cut back with 1000 grit wet/dry paper ensuring that the clear coat wasn’t cut through to the colour. This is followed by 1500 and 2000 grit and then rubbing compound.

This resulted in a very pleasing, acceptable finish from “rattle” cans.

The electrics mounted on the scratchplate were checked out and sprayed with contact cleaner as appropriate.

Before the scratchplate was screwed back on an earth connection was established to the bridge and the “R” that was found on the headstock was glued into the cavity in memory of Rick.

The frets were levelled, re-profiled and polished and a brand new set of light strings installed. The truss rod adjusted, the intonation tweaked and the action optimised.

The guitar is finished. 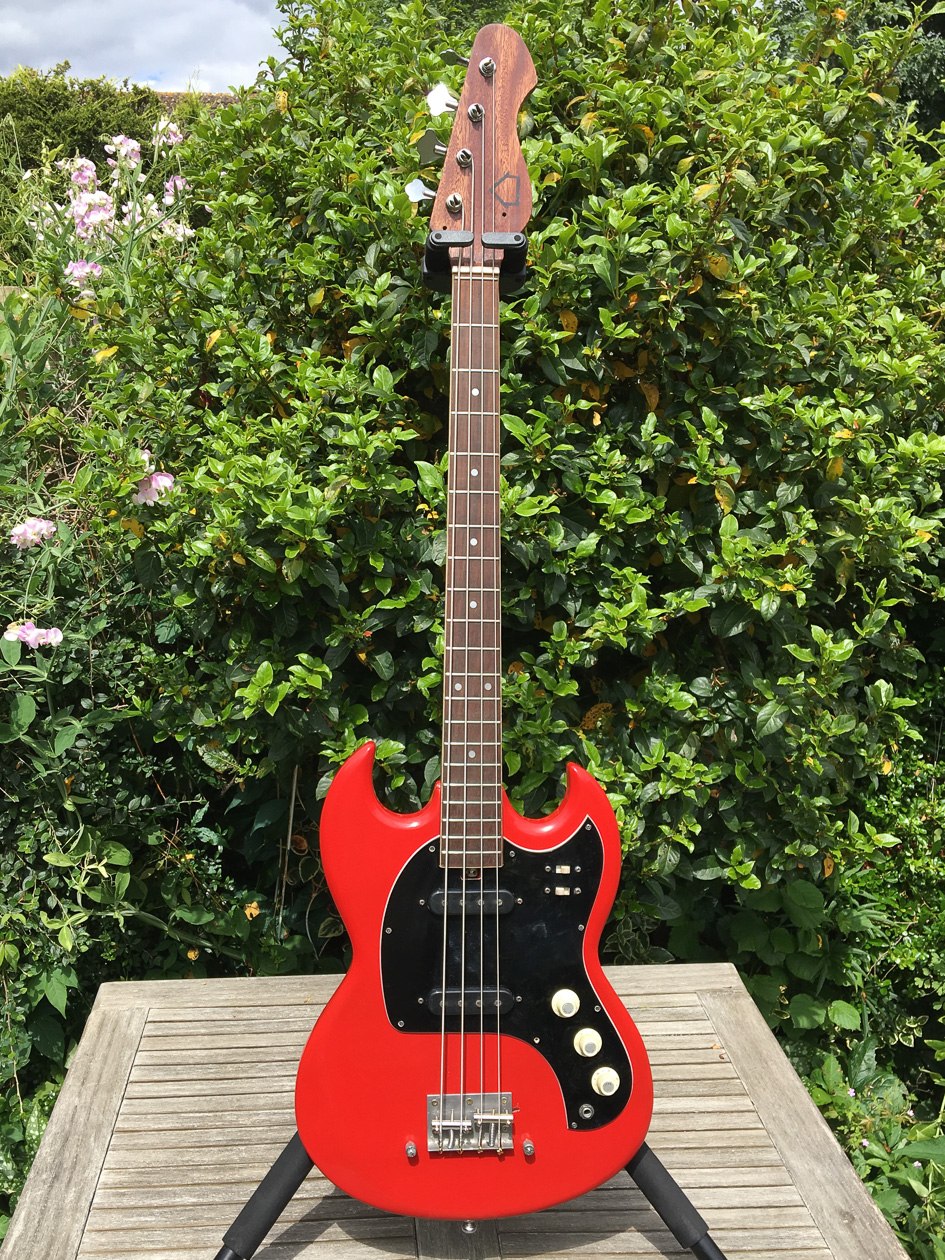 We took the time to inlay our Shed logo in the headstock using rosewood.

Compare the following 2 photos with the original ones taken before the work commenced.